What Exactly is a Heller Myotomy?

For patientss who suffer from Achalasia, one of the most effective surgical options for treatment, is the Heller myotomy, where the Surgeon will split muscle fibers from the gastric cardia proximally onto the anterior distal esophagus. Then, the surgeon will proceed to either perform an anteior (Dor) or posterior (Toupet) wrap.

With the Heller Myotomy, a laparoscopic technique remains the current standard of care.  With surgeons who are trained in robotic modalities of surgery, this also remains as a viable avenue of treatment.

Achalasia is a disorder of the esophagus that makes it difficult to swallow solid or liquid foods. The esophagus is the tube that moves food from the mouth to the stomach.

When the LES relaxes, food can move from the esophagus into the stomach.

When people have achalasia:

●The lower part of the esophagus does not work normally
●The LES does not relax, so food cannot move into the stomach 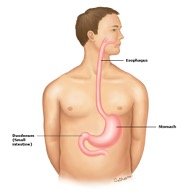 What are the symptoms of Achalasia?

The most common symptom of achalasia is trouble swallowing foods and drinks. Other symptoms can include:

Is there a test for Achalasia?

Yes. If your doctor or nurse suspects that you have achalasia, he or she will do 1 or more of the following tests:

1. Measuring the pressure in your esophagus and LES with Manometry – Your doctor will put a thin tube into your mouth or nose and down into the esophagus. The tube will measure the pressure there. This test can tell your doctor for sure if you have achalasia.

2. Barium swallow – Your doctor will give you a drink called “barium.” Then he or she will take an X-ray as the barium moves down your esophagus

How Else is Achalasia Treated?

Doctors can treat achalasia in different ways. Treatments cannot cure achalasia, but they can improve symptoms. The different treatments include:

• Medicines – Different medicines can relax the lower esophageal sphincter (LES). People can take these medicines before they eat. ( this is a temporary measure and medications can have side effects such as low blood pressure)

• Making the LES wider – During an upper endoscopy, a doctor can use a thin wire to put a special balloon through a person’s mouth and down into the esophagus. The balloon is deflated until it reaches the LES. The doctor puts air into the balloon to widen the LES. Then he or she lets the air out of the balloon and removes it and the wire.

• Surgery – Laparoscopic (or Robotic) Heller Moyotomy vs Per Oral Endoscopic Myotomy ( POEM ) procedure: A doctor can cut open the LES to make it wider. This can be done by making small cuts in the belly or chest, or during an upper endoscopy without cutting through the skin at all.

*Surgical treatments will give the best result long term!

What is POEM Procedure?

Peroral endoscopic myotomy (POEM) is the endoscopic equivalent of surgical myotomy and a newer technique for the management of achalasia.

POEM utilizes the principles of submucosal endoscopy to transform the submucosal layer in the esophagus and proximal stomach into a tunnel, through which esophageal and gastric myotomy are carried out using a flexible endoscope.

POEM is performed perorally without any incisions in the chest or abdomen with minimal pain and fast recovery! 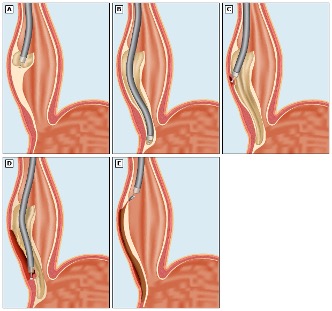 This is a new procedure and very few surgeons around the country are offering this novel treatment approach achalasia. In some studies POEM was superior to Heller myotomy (another surgical option), especially for type III achalasia.

In addition, conditions such as “Jack Hammer Esophagus” and “diffuse esophageal spasms” can be treated with POEM procedure.

With the Heller Myotomoy, this is a done laparoscopic or Robotic through small incision in the abdomen. This is a surgical procedure in which the muscles of the cardia (lower esophageal sphincter or LES) are cut, allowing food and liquids to pass to the stomach. 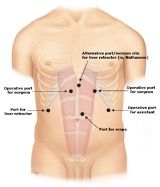 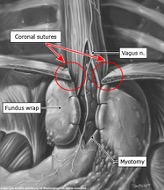 Which Achalasia Treatment in Atlanta is Right For Me?

To choose the treatment that’s right for you, talk with your doctor. Ask him or her about the benefits, risks, and side effects of each treatment.

Do I need to follow up with my doctor?

Yes. You will need to follow up with your doctor on a regular basis. He or she will check that your treatment is working and that it isn’t causing side effects.

Your doctor will also keep checking you for long-term problems. That’s because people with achalasia have a higher than normal chance of getting cancer or other problems of the esophagus.